30 days with a bullet journal

In September I started keeping a bullet journal. If you’re not familiar with the concept, it’s basically just like it sounds: a cross between a bulleted list and a journal. It’s a way to keep track of what you do each day, as succinctly as possible.

A search through Pinterest or Instagram will reveal some ridiculously complex and artistic bullet journals. It seems to have become a popular way to show off your doodling skills in the name of productivity.

These are not my journals.

I had no such aspirations. Instead, I was looking for a simple way to track what I was accomplishing throughout the days and weeks.

I used my bullet journal daily through the month of September, which was 30 days as of yesterday. Here are my impressions so far.

Starting off I had doubts about the idea of a physical notebook. Ever since I was about 12 I’ve been obsessing over technology and the ways it makes our lives easier and better. At that time I saved up something like $150 and bought a PDA. If you’re younger than me, a PDA (personal digital assistant) was the grandaddy of the smart phone. It had a calendar, address book, to-do list, notepad, and email if you were lucky. The later versions had a basic web browser built in, right before they were killed off by the release of the iPhone. At the time I was convinced that my productivity and memory recall would increase exponentially if only I had one of these magical devices.

The PDA didn’t change my life significantly, but I continued to live under the assumption that technology was making my life much easier. As a result, physically writing something down seemed backwards and counter-productive.

I bit the bullet (no pun intended) and bought a Moleskine journal (actually I bought 3 of them, because you can never have enough fancy hipster journals). Creating the index and future log was fun, but I seriously doubted whether I would keep this up for long.

As it turns out, the physical aspect played out in my favor. I carried the journal around in my backpack right in front of my laptop, which meant that I had no choice but to see it every day when I sat down to work. I got into the habit of pulling it out right at the start of the day and setting it down beside my laptop. In that spot it served as a visual reminder that I had goals for the day.

The act of filling out the day’s milestones and marking them as complete was almost therapeutic. When I didn’t make the progress I had hoped, it served as a reminder that I had missed something (this happened often).

Unlike the examples I referenced above, my day-to-day journaling looks mind-numbingly similar. Each day has it’s own bulleted list, which I filled out as the day progressed. I used the most barebones notation: • bullets are tasks, – dashes are notes or reference items, and º circles are meetings or events. 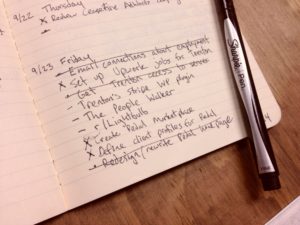 There were a few instances where I got brave and changed the format; these were all for meetings, where I just dropped any sort of notation and wrote my scattered thoughts line-by-line until the meeting was over. Otherwise, I stuck entirely to the daily format.

Now that a month has past, it’s time to create a new month calendar in the journal. One of the key points of bullet journaling is migration: reviewing all unfinished tasks or goals in the past month and migrating them forward as necessary.

Having just completed migrating all of last month’s tasks, I think it’s the most valuable part of a bullet journal. With my other productivity/organization setups, unfinished tasks ended up in a Someday list which was subsequently ignored. Tasks would disappear for months or years, if not forever. With migration, I’m forced to go back and reassess any unfinished business to see if I still need to pay attention to it.

So far my experience with the bullet journal has been positive. I’ll continue to use it to track my progress through the month. I don’t foresee a whole lot of changes to the format.

Ultimately, the bullet journal is just a way to document what’s happened; it’s my choices during the day-to-day grind that make the difference. Having tried so many to-do lists and productivity hacks over the years, I’m painfully aware that the real gains come from hard work and persistence.

If you’re curious about bullet journals, visit the website – or if you’re looking for doodling inspiration, look at the #bulletjournal hashtag on Instagram.