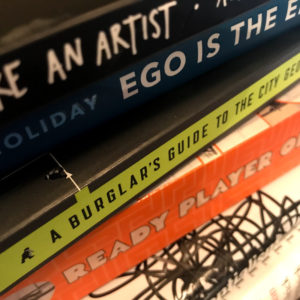 I used to be a reader. Some would call me a voracious reader. It was my gift. My mother claims when I was a toddler she could leave me with a stack of books all day and never needed to check up on me. It’s probably not far from the truth.

By the time I was 10 I had read every book in the house. I was so desperate to read, I started reading our 27-volume encyclopedia set. I lost interest somewhere around ‘spumoni’.

In 9th grade I took a reading test to check my speed and comprehension. According to my dad’s memory, I read 750 words per minute with 95% comprehension.

Unfortunately, after high school my reading dropped off considerably. Once I had my own transportation, there were just too many other things to do. There was money to make, people to meet, places to visit. Books had lost their interest as I discovered the wide world outside my imagination.

Of course, I still read some books. I read some business books, how-to and psychology books. Once or twice a year I would pick up a fiction book, and sometimes I’d even finish one. Mostly, I read articles, blog posts, Facebook statuses, tweets. Some great, some good, mostly worthless.

Towards the end of last year I realized how little I actually read, and how much I miss reading. When it came time to set goals for 2018, I knew what I needed to do.

First, I was inspired to start reading again by Jon Acuff’s incessant Instagram posts about the books he was reading (learn how Jon read 100 books in 2017). Many of these books were drawn from his reviews.

Second, last year I read The Obstacle Is The Way by Ryan Holiday. The book was fantastic, definitely the best book I’ve read in several years. After reading that book I found Ryan’s reading list and added a bunch more books to my must-read stack.

Third, Jason Zook from JasonDoesStuff has a running list of books he’s read, an idea which I ripped off for my reading list. Many of his recommendations made it onto this list.

And fourth, I asked my Facebook friends for recommendations and they came through in a big way! If I put all 100+ names here, the post would be longer than the reading list!

Okay, we’re almost to the list. Before we jump into it, there are a few things I want to point out.

This list is not a recommendation. There are some great books on here which I’ll rave about after I’ve read them. There are some others which are the antithesis of everything I believe about humanity (I’m looking at you, Mein Kampf). Let the reader beware.

This list is not for children. Along the same lines as the last point, some of these books may be inappropriate for impressionable minds. Don’t print this off and hand it to your kids as a summer reading assignment.

This list is not complete. It’s only January, which leaves 11 more months for recommendations and discoveries. I’m super excited to find more great books to read, and I’ll try to add them here as I find them.

If you’d like to know how far I’ve gotten and get my opinions on the books I’ve read in 2018, check out my reading list.